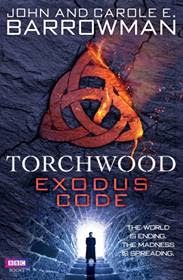 It starts with a series of unexplained events. Earth tremors across the globe. Women being driven insane by their heightened and scrambled senses. And the world is starting to notice – the number one Twitter trend is #realfemmefatales.
Governments and scientists are bewildered and silent. The world needs Torchwood, but there’s not much of Torchwood left.
Captain Jack has tracked the problem to its source: a village in Peru, where he’s uncovered evidence of alien involvement. In Cardiff, Gwen Cooper has discovered something alien and somehow connected to Jack. If the world is to be restored, she has to warn him – but she’s quickly becoming a victim of the madness too…
Thanks to BBC Books

Video of the Day – The Late Show with Stephen Colbert, 2016

This site uses Akismet to reduce spam. Learn how your comment data is processed.

How to Reach Us

Good Omens 2: The Second Coming of Crowley and Arizaphale!

Blast from the Past – The Continuity References of Doctor Who:...