In a panel titled BBC America Takeover, the group answered questions about series 10 and the upcoming Doctor Who Christmas special. 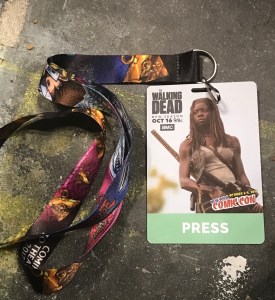 The panel was hilarious, great fun, and packed. The BBC panel was held at the Madison Square Garden Theatre, which holds thousands. And it did.  Happily, our press pass cleared the way through to a speedy entrance.

After an energetic introduction and waves of delighted applause, the stars finally appeared one by one and it was straight into questions from the moderator. It was an excellent panel with lots of fun and interesting questions along with some lengthy answers. Below are a few highlights.

Moffat was first as he gave his reasons for bringing back Matt Lucas’ character Nardole to the show. “The show was looking for some sort of comic foil for the Doctor, and just then, Lucas asked about returning” he reasoned. “Lucas is like a butler or a valet!” Moffat laughed….“plus Nardole gets to take a ride in the TARDIS”.

Lucas joked later “when you press the buttons, Peter gets a bit annoyed. It’s a good way to wind him up!” But why did Lucas want to return? “I love the rain, and  it rains a lot in Cardiff,” said Lucas deadpanned. “And I love paying for my own breakfast.”

Also part of the panel was new companion Pearl Mackie who beamed with delight the following praise from Peter Capaldi. She was asked about the audition process that she went through revealing that she was told she would be auditioning for a show called ‘Mean Town’. Apparently, “there was no such show,” said Mackie. “Mean Town “is an anagram for Woman Ten. The tenth companion, that’s me”

Following a readthrough with Andy Pryor the casting director, there was a bit of a wait. “If you wait more than a week and half in TV you haven’t got it” explained Mackie. When she did eventually get a call back a further read through with Peter followed. ‘There was a great back and forth between the characters. The way Steven has written it there is a wonderful dynamic between them.”

During the panel, Steven Moffat confirmed again that Pearl Mackie will not be in this year’s Christmas Special but will appear in “a very different way” at the start of series 10.

But what about the Christmas special? A trailer had been promised. But before we watched we were given a look at special’s very own superhero Grant. This “traditional” hero will be played by America Gothic and Shameless US star Justin Chatwin. But why a superhero?

Moffat explained he was obsessed by superheroes when he was a kid, he loved Clark Kent and the way he hid his real identity from Lois Lane to protect her. “It was a love triangle with two people in it.” His own alter ego was Red Rat, a hero for only a few hours when Moffat was six.

Capaldi added that he calls the new special “a good-hearted ironic superhero movie.”

Exciting to go to work

The twelfth Doctor is now on his third series and says that it is an extraordinary privilege to be the job and to “have these wonderful actors (pointing to Pearl and Matt) along with an absolutely individual take on the companion’s role. It’s exciting to go into work every day to see what unfolds.” Continuing he praised Matt Lucas for bringing a certain “alienness to the show.”

The panel continued with various questions from the audience from stage managing to who else they would like to be on the show. Pearl would like to be a Dalek and Peter would like to be The Master. The audience also wanted to know about their favourite bit of filming so far, to which Mackie revealed would be episode 3 of the new series. “Peter and I are in the extremely heavy suites in a green room with an imaginary monster. It was absolutely insane”

Sadly all glorious things come to an end. But Capaldi noticed that some chairs in the front row had collapsed. “Does anyone need a Doctor?” he intoned, to the hysteria of the crowd.

Jodie Whittaker is Heading to Gallifrey One!

REVIEW: Doctor Who: The Eaters of Light (Target Collection) by Rona Munro

This site uses Akismet to reduce spam. Learn how your comment data is processed.

How to Reach Us